The Labyrinth originated in Southern Europe and can be traced back to around 4,500 years ago. In Greek mythology, the Minotaur that lived in the centre of the labyrinth was killed by Theseus, and after the Minotaur was killed, it was used as somewhat of a “rite of passage.” Entering the labyrinth symbolised a person fighting with their own “demons” and experiencing a “rebirth” and emerging as adults, ready to take their place in society. These labyrinths were painted on pottery, engraved on walls or carved onto rock surfaces.

There are many different styles of labyrinths today, however, the ‘original’ design is called the “Cretan Labyrinth.” (What you see in front of you) It is made up of 7 concentric circuits, forming one unicursal (one way in and out) pathway. The number 7 is considered sacred by many religious traditions and the symbolism of 7 concentric circles in the labyrinth allows it to be used by many different religious/spiritual traditions (e.g. “Completeness” in Christianity & Judaism; The Seven Primary Chakras in Hinduism; Seven Heavens in Islam; The Seven gods of Fortune in Japanese Mythology; The number of steps the newborn Buddha takes in Buddhism just to name a few).

In today’s context, labyrinths are used as a means of meditation, to grow spiritually or psychologically. One way of walking the labyrinth is by using the Three Fold Mystical Path that was developed and used by the early Desert Fathers of the Church: Purgation (purification or cleansing), Illumination and Union. The first stage involves slowly walking towards the centre of the labyrinth, and by doing so, allowing all your inside and outside worries and concerns to slip away: clear your mind. The second begins once you reach the centre. This is a time for personal prayer and reflection: spend some time reflecting on what emerges as significant in your life experience, it is an invitation to receive, to be illuminated or inspired by the Divine. Lastly, the third stage takes place upon retracing your steps to the entrance. This stage is an opportunity to find union with God or some other aspect of the Divine to enable you to find empowerment or healing in your life. This final stage provides grounding, guidance and integration for whatever you may have received.

This is only one example of how the labyrinth can be used. You may focus your thoughts on a question or concern as you walk through the labyrinth, or simply walk it with a quiet mind. In the labyrinth, as in life, there is no single “correct” way to follow the path.

This area was built by our Passionist students. It was completed early 2020 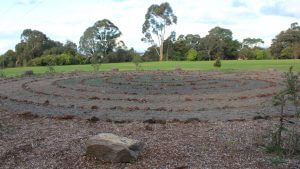 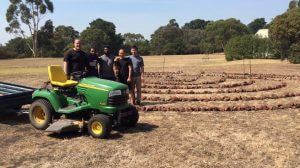