The site of 205 Serpells Road, was originally part of about 45 acres in Serpells Road owned in 1901 by Thomas Smith, a gardener. By 1903, Smith had erected a substantial house. Tom Smith died in 1912 and following a subdivision of the property, his son, orchardist, David Tully, a Doncaster district fruit-grower, bought 15 acres of land including the site of 205 Serpells Road, for his son-in-law and fellow orchardist, Frank Ormond Smith. The house was erected soon after.

The years during WWI (1914-18), were prosperous for district orchardists. A Templestowe co-operative cool store was established at the start of the 1919 season. The Doncaster and Templestowe fruit growing industry reached its peak in the 1920s. 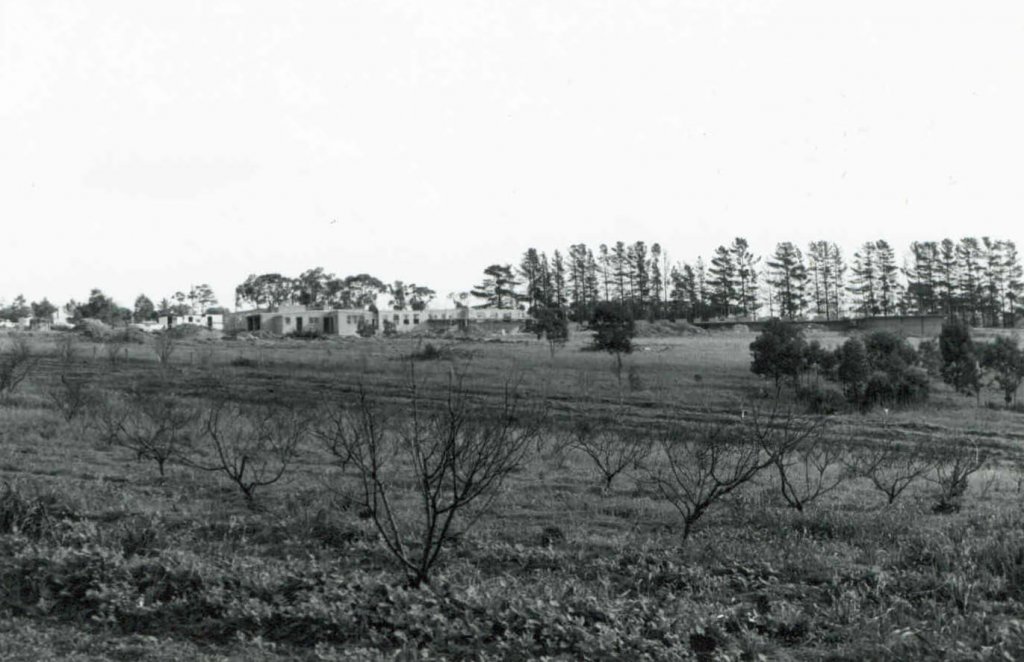 The house stayed in the Smith family until August 1958. It is an early Edwardian bungalow and is of local historic significance to Manningham Council because it represents an example of an orchard house, showing the development of the industry during the early decades of the twentieth century when it was at its peak. It has associations with the locally important Tully and Smith families.

It was determined the poor condition or low integrity of a heritage place should not be used as justification for its demolition, particularly if it appears the condition of the heritage place has deliberately been allowed to deteriorate.

In 1968 when a full contingent of students arrived, 205 Serpells Road was owned by a young couple, Ken and Lorraine Nelson. The students had been given instruction from Fr Dominic that if they went out they could have one beer. They could have a second if their arm was twisted.

Ken Nelson used to grab a few student arms frequently, twist tem, offer another beer and continue. It was always safe to ‘drive’ home – just walk across the road!

The Chapel and Monastery stand on 11 acres of land which was acquired by the Passionists in June 1963 at a cost of 20,000 pounds. The area was a former apple and pear orchard, surrounded by other orchards, but on the opposite side of Serpells Road, the land had already been developed and Matt & Marlene Walsh had acquired their existing home in 1968. However, it was not until 1981 when the land on the eastern boundary was subdivided and George & Shirley Barnes acquired the adjoining half-acre block and built the house where they still reside. 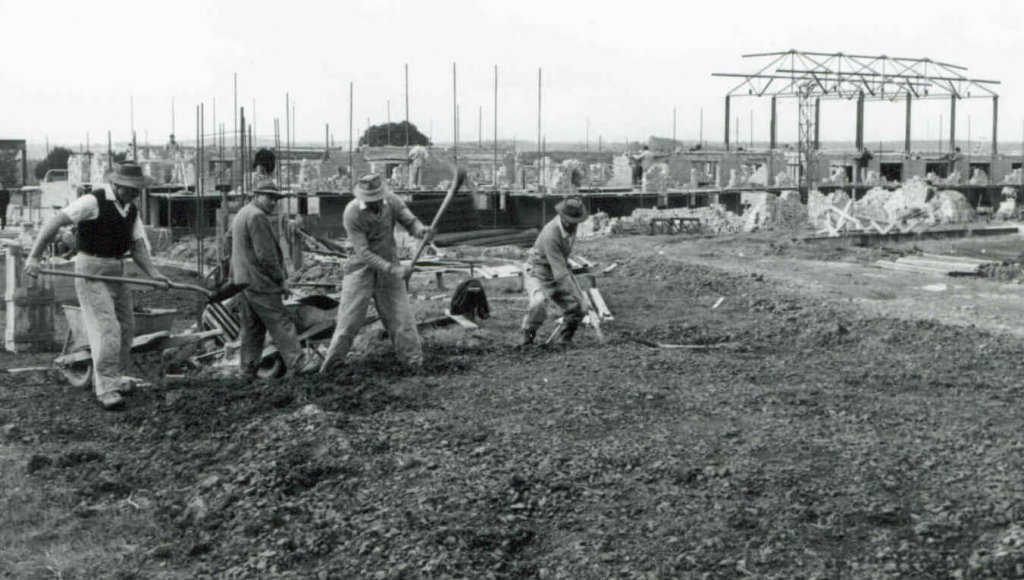 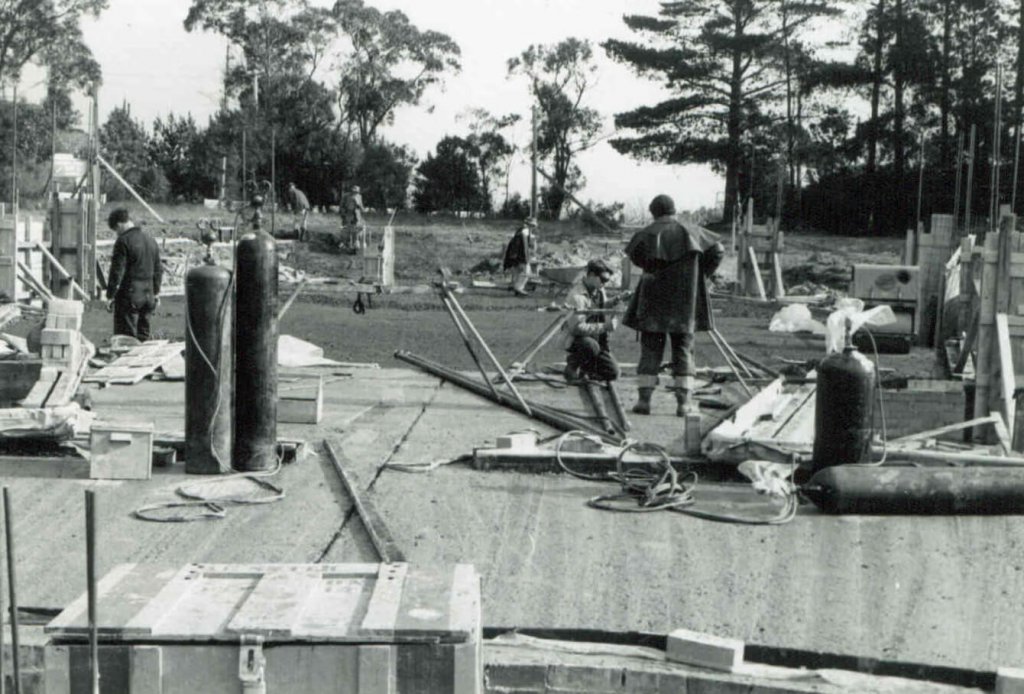 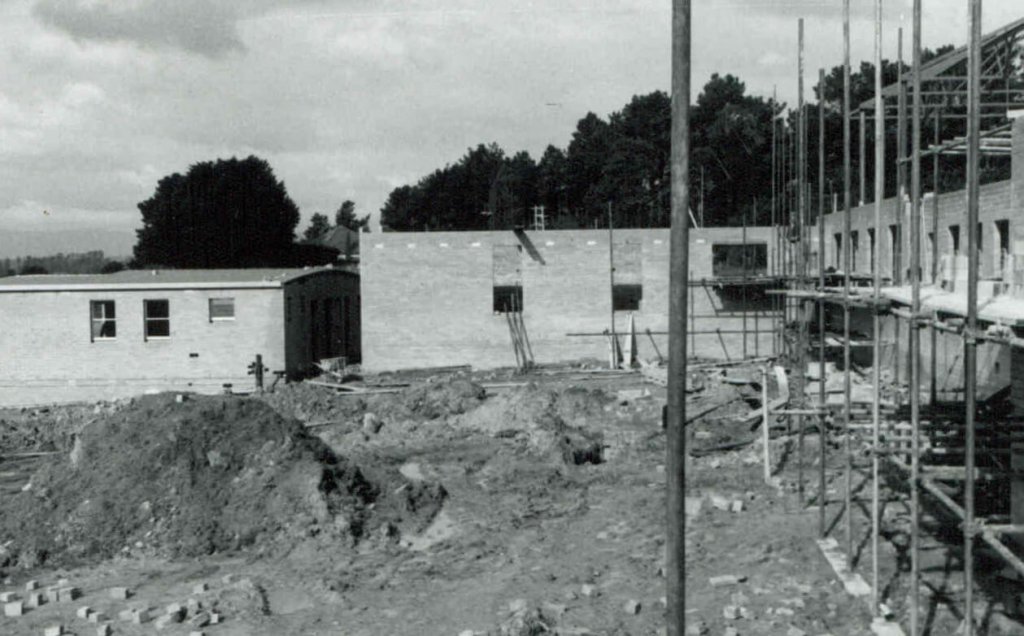 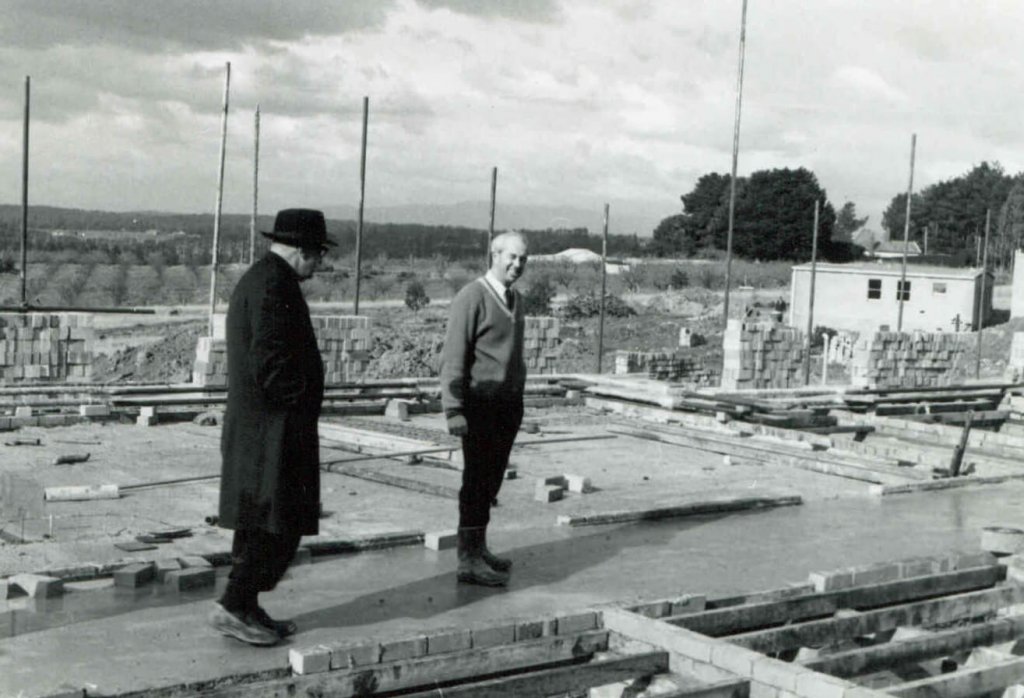 The Monastery Building was constructed at a cost of 400 pounds per square and the total outlay including furnishings was 180,000 pounds. At the beginning of 1964, there were 29 students in Adelaide and 15 Novices studying at Goulburn. It was anticipated that 35 students would move into the new accommodation, when built. In fact, there were 40 students.

The Monastery was officially opened by His Grace Archbishop Simmonds on May 23rd, 1965 at 3 pm. As the day was damp & rainy, the speeches were held in the Library (now the Corbett Room) and the crowd overflowed into the corridors. 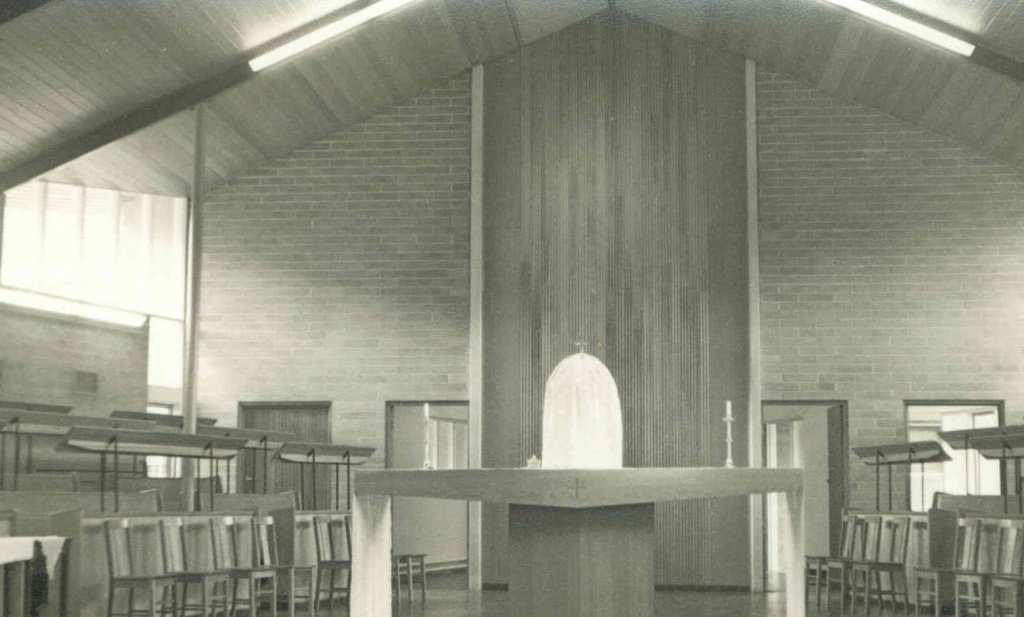 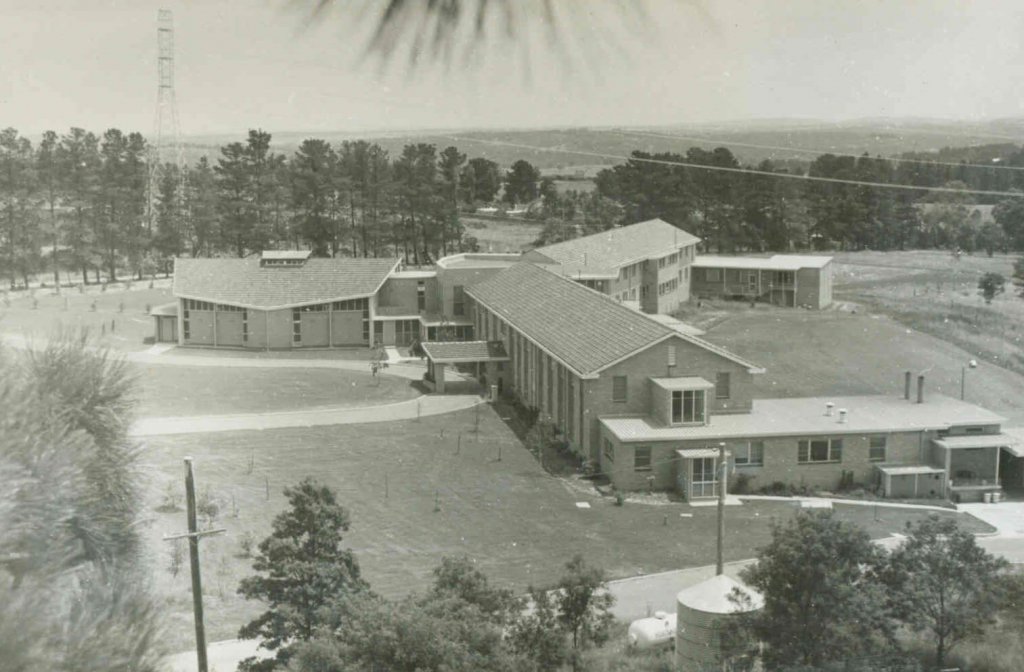 Although construction of the building was not completed until June 1965, the first community comprising six priests, two brothers and eighteen students took residence on March 11th 1965, a very hot day with bushfires burning at Eltham. Classes were commenced in the garage and workroom (now The Tavern Room). The Priests recreation room (now the Chapter Room) functioned for some time as a chapel.

The first students really found out what was meant by ” making your own bed”, because they did just that, along with desks and some wardrobes, which were constructed at the Passionists’ Geelong home, St Gabriels, and then transported to Holy Cross for varnishing.

As well as attending classes, the students were expected to earn some money by taking on casual jobs: gardening, cleaning, painting and working in hotels and shops. 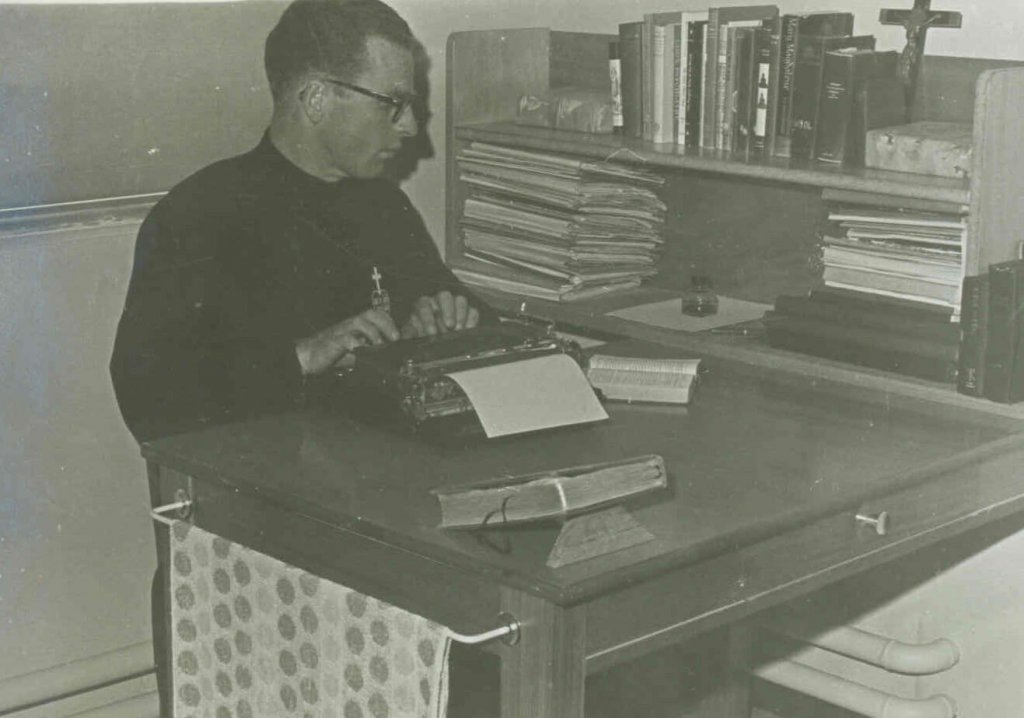 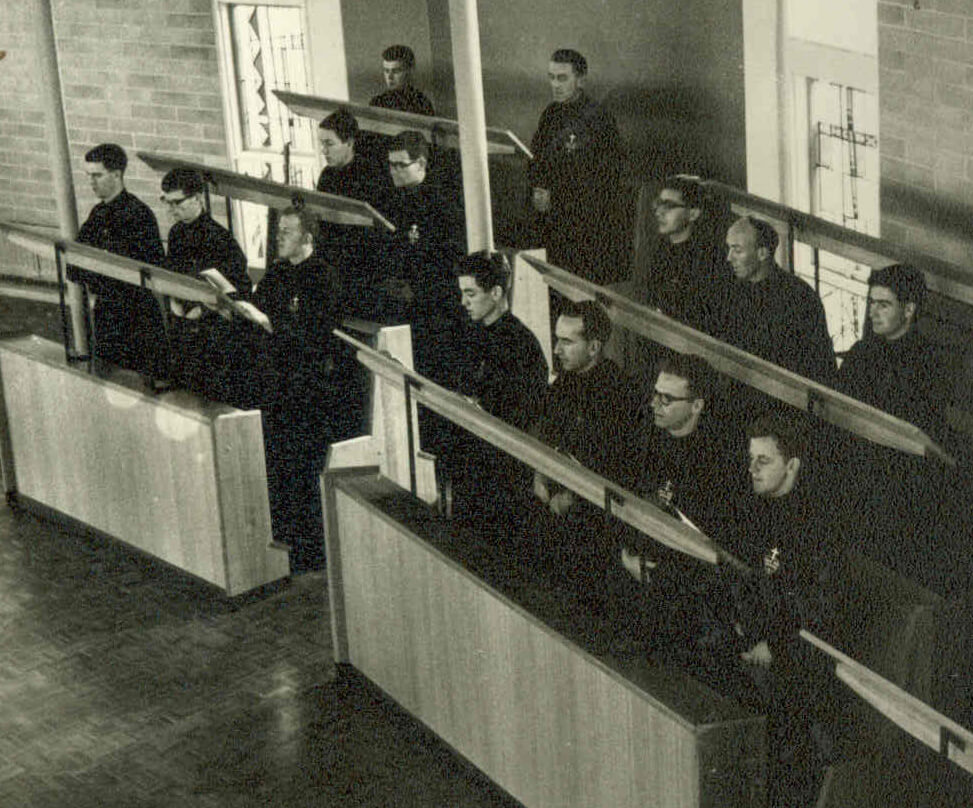 The furniture for Holy Cross took two years to build and was completed in 1965. More than fifty years after it was completed, the same bedroom cupboards, beds and desks in every bedroom at Holy Cross are still in use, as well as the chairs in the dining room. Imagine over those fifty plus years how many people have sat on the chairs.

Jim Kerrigan was trained as a first class wood machinist, in a high quality company. After seven years he joined Coles as an executive, and managed several stores. He suffered suspected appendicitis while stationed in Grafton, and returned home for an operation at Lewisham hospital in Sydney. Following the operation he developed a massive infection and spent five weeks in hospital. Coles then transferred him to their Burwood store.

Some weeks later a radio announcer whom he had met at church in Grafton, returned to Sydney, and asked if Jim could take him to the Passionist community at Marrickville, which he did. Father Gerard Mahony was Provincial at the time. He spoke with both of the men. They were so impressed that they both decided to join the Passionists. Both went to St Ives for almost two years and then to the novitiate in Goulburn. Jim’s friend returned home after some months in the novitiate but Jim stayed and became a professed Passionist. Following novitiate he went to Glen Osmond in Adelaide to study philosophy at the time building had begun at Templestowe.

Jim suggested ‘we’ could make our own furniture, if he could get access to work making machines. He took the train from Adelaide to Melbourne and looked at a Christian brothers technical school, and then went down to Geelong where fellow Passionist, Fr Peter Cooper (brother of Fr Pat) had a big shed.

Jim opted to build all the furniture at our community in Geelong. With help from fellow students, Jim designed the wardrobes, beds, book cases and desks for the individual rooms and for the class rooms. They also undertook a lot of work for the library, which is now the Corbett room. Apart from furniture for the library and classrooms, there was a bed, cupboard, desk and bookcase made for seventy rooms!
A fellow student Julian (Peter) Salmon, and Jim Kerrigan designed the organ, but the timber that was bought was not mature enough and it was slightly bowed.

The furniture making work continued for two years. Then they moved to Templestowe where they continued to do whatever still had to be completed. Jim chose eight students who were practical, and took them to Geelong for the two main holiday periods. One of those was Paul Mercieca. Paul remembers that a “good Catholic man” Brian McCarthy, did the varnishing of all the furniture. Fr Dominic Morris transported a lot of the furniture from Geelong to Templestowe and towards the end a truck was hired to transport the remaining furniture.

Jim did not remain with the Passionists but the fiftieth anniversary was a time to salute Jim for the wonderful contribution he made to Holy Cross.